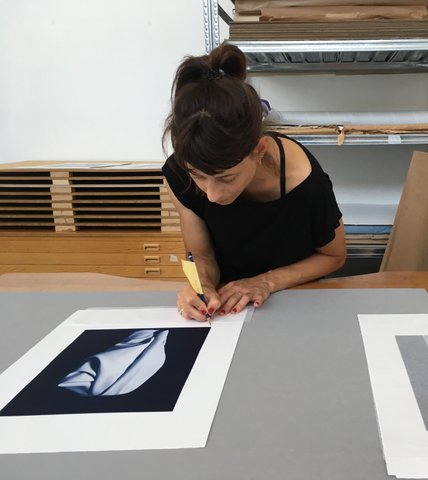 Valérie Collart (b. 1981) is represented by SIRIN Gallery, Copenhagen, DK.

VALÉRIE COLLART explores the relationship between sculpture and photography in her work. She reflects on the penetrability of those two media by experimenting with their boundaries. The ambivalence of this artistic practise raises the question of whether Collart’s work is image or object-based.

AN IMAGE FROZEN IN TIME

The artist’s photogravure series ‘Ruins’ represents a material meeting between the two-dimensionality of photo documentation and the three-dimensionality of the object. Conditioned by the size of her studio Collart produced a series of small-format objects, with the only purpose of making them a subject of her photographic work.

By transforming the digital photo files into large-format photogravures the artist has used the media of fine art printmaking to evoke the cultural memory of early new world monumentality in us. Collart’s work is part of the postmodern fascination with the archaic. It uses the digital virtuality to reconstruct the figurative there where the figure and the substance seem to disappear. The artist’s pseudo-archaic pillars, is, on the one hand, a reference to the past and yet at the same time, it represents the energy of transformation visualizing to us what is to come in the future.

The plasticity of the acrylic paint used by Collart to represent the softness of fabric in her earlier works has in the last couple of years been exchanged with drapings. In her most recent body of work, Collart had begun to investigate the idea of covering and wrapping. She alters the physical form and the visual experience of the object that she presents by wrapping it in a piece of fabric. Concealing the object from us she challenges the viewer to see it in a new space in which it now exists. 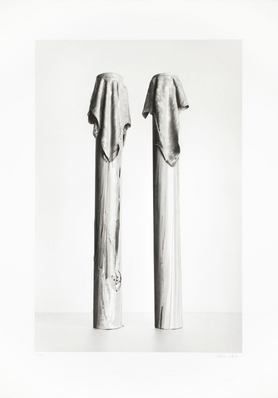