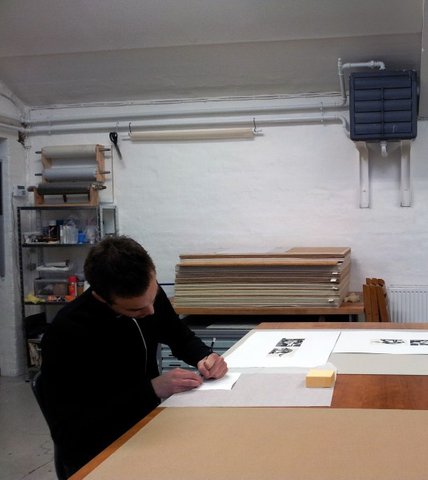 ANDREAS ALBRECTSEN’s work leans on the centuries-long practice of drawing. He also seems to be influenced by the canons of fine art printmaking. The large-format paper sheets on which Albrectsen creates his black and white drawings seems to be borrowed from this media.

There is an obvious formal likeness between Albrectsen’s drawings and graphic work. But there are also similarities in an artistic approach to the two media. Andreas Albrectsen’s hands-on practice both in drawing and intaglio are anchored in his intellectual curiosity. Whether working with drawing, printmaking or installation Albrectsen is driven by an idea, his technical bravura is only a means to the end.

A characteristic trait of Albrectsen’s artistic practice is an intellectual play of associations. His works are a visual rebus made entirely out of pictures. Making use of photorealistic drawing the artist creates collages where separate images are to form a new composition. Distanced from their original context those images are placed next to each other to convey new meaning. Since Albrectsen’s original intention with the work remains unknown to the spectator the interpretation of the artist’s mental intention becomes the real subject of the work.

In his intaglio work, Albrectsen supplies the key to the rebus by offering the viewer a title. Second Nature can allude to many things. One possible interpretation that occurs immediately looking at the composition is the unnatural state in which both the human and animal figures are presented to us. The state of beyond control of the woman is probably a depiction of the effects of alcohol abuse. Against her lifeless body, we have the gesture freshness of a scratching animal. Its freshness, however, is only an illusion. Attached to a pedestal this stuffed puppet is only a shadow of the animal it once was. Outside of their natural ambience, the two protagonists are documented in a state that shouldn’t be theirs, and yet it becomes their second nature when portrayed like that by the artist. 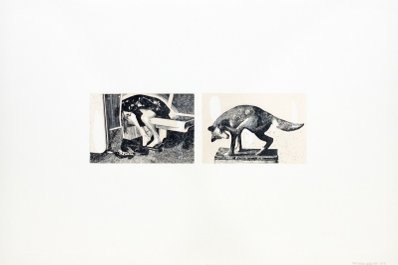